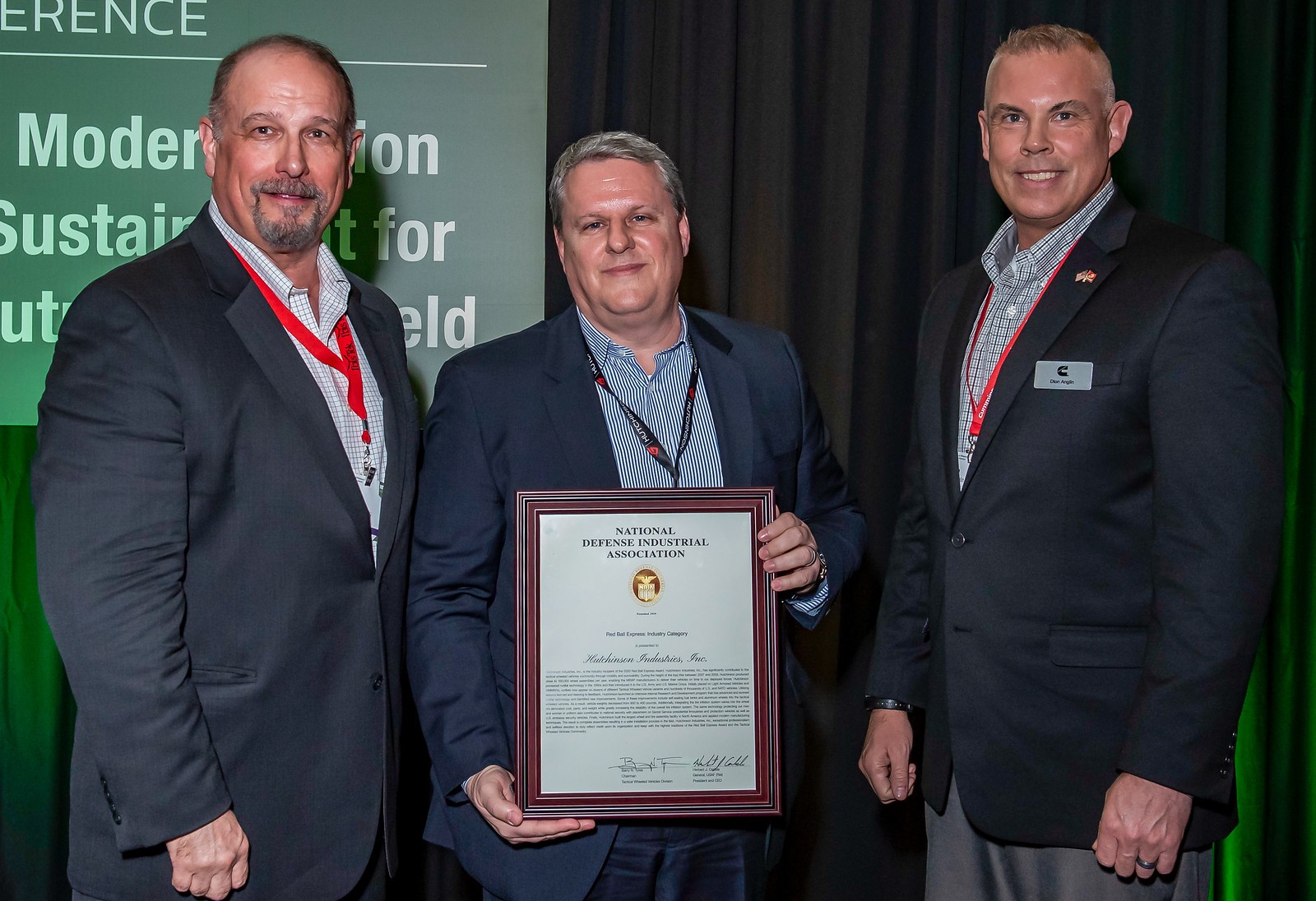 The Tactical Wheeled Vehicle Division of the National Defense Industrial Association (NDIA) presented Hutchinson Industries with its Red Ball Express Award on March 3, 2020. The award recognizes an organization or person that significantly contributed to the strengthening of national security by developing, procuring or supporting tactical wheeled vehicles.

Andy Barker, CEO of Hutchinson Industries accepted the award on the company’s behalf. As a former Naval Aviator and Gulf War veteran, Barker understands firsthand the importance of providing the highest quality equipment to warfighters. “I am honored to receive this recognition on behalf of Hutchinson Industries,” Barker said. “I commend NDIA for acknowledging the heroic and necessary actions of the brave soldiers on the Red Ball Express who risked their lives to ensure a victory for our country.  Hutchinson Industries works hard to provide the best equipment possible for our deployed soldiers to complete the mission and return home safely to their families.”

During World War II, dedicated soldiers and sailors in the U.S. Armed Forces served on the Red Ball Express.  After the Allied breakout from the Normandy beachheads in July 1944, the armies started a rapid advance across France. However, because rail-lines did not reach into the interior of France, trucks were needed to deliver supplies of food, fuel, and ammunition from the railroads to the advancing units.

The U.S. Army’s Motor Transport Brigade created a re-supply operation known as the Red Ball Express which began operation on August 25, 1944. This designation came from the red-painted balls posted on the side of supply trucks and on-road signposts.

Seventy-five percent of the soldiers running the Red Ball Express were African American. There were many recorded acts of heroism performed along the supply routes. During the Red Ball Express’s 81 days of operation, 412,193 tons of supplies were handled and transported. The Express’s mission ended on November 16, 1944, once rail-lines were repaired to ensure the flow of supplies could continue until the end of the war.  The US Army could remain strong because of the constant flow of equipment and supplies which ultimately helped shorten the duration of the war in Europe.

The Tactical Wheeled Vehicle Division of NDIA presents The Red Ball Express Award annually as a tribute to the famous Transportation soldiers in WWII that continue to inspire the military transportation industry today.

About NDIA
The National Defense Industrial Association (NDIA) is America’s leading defense industry association promoting national security. NDIA provides a legal and ethical forum for the exchange of information between industry and government on national security issues. NDIA and its members foster the development of the most innovative and superior equipment, as well as training and support for warfighters and first responders, through its divisions, local chapters, affiliated associations and events.

About Tactical Wheeled Vehicle (TWV) Conference
The Tactical Wheeled Vehicle (TWV) Conference brings together leaders from DOD, the military services, industry, prime contractors, subcontractors, suppliers, and academia to address present and future tactical wheeled vehicle requirements. The conference provides a unique atmosphere for open discussion between participants on the needs of the military users. The information and dialogue presented are invaluable to all organizations which play a role in the design, development, innovation, acquisition, production, delivery and sustainment of tactical wheeled vehicles to government customers.